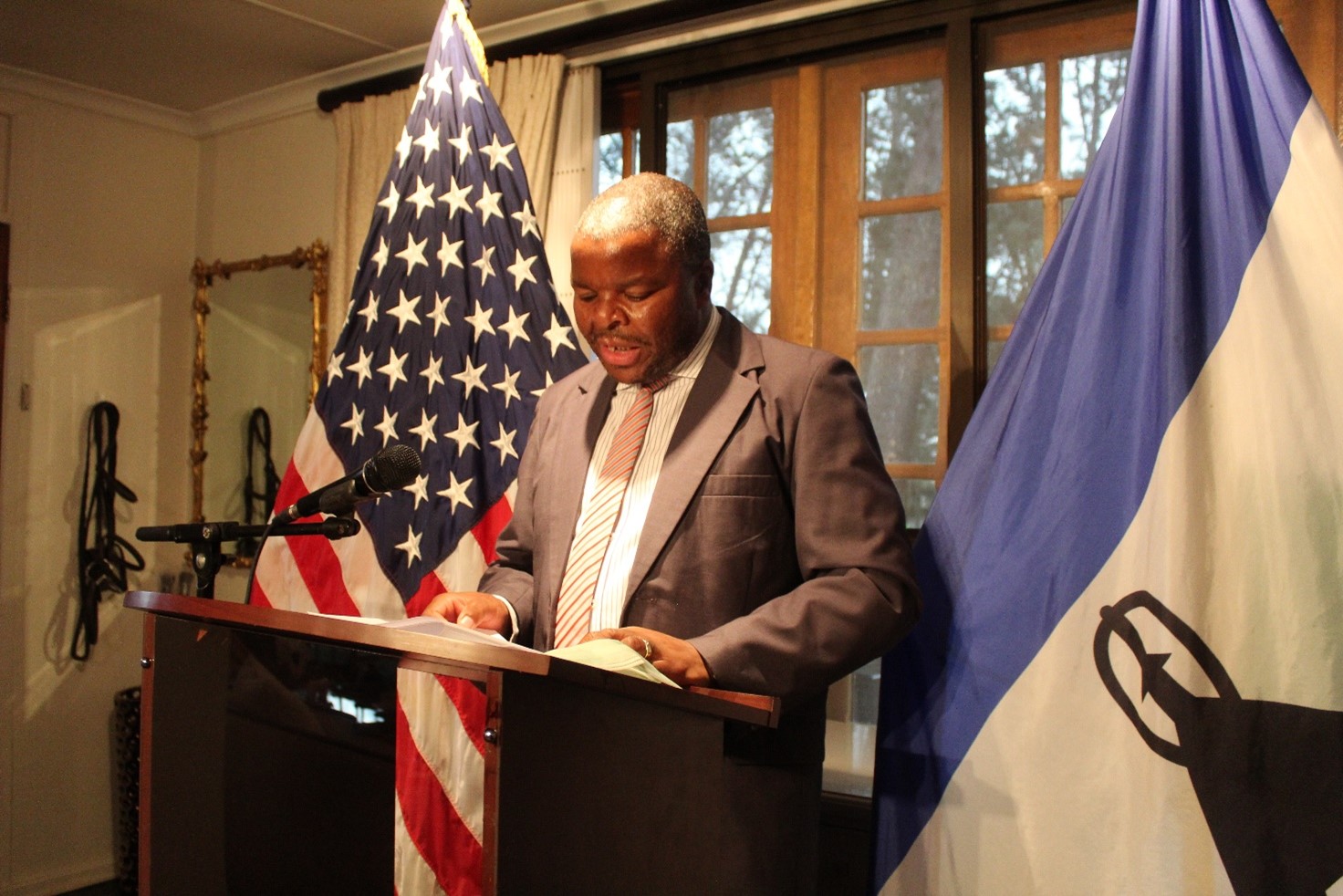 On Monday 8th November 2021, the Honorable Minister of Home Affairs Motlalentoa Letsosa delivered the update on this year’s TIP Interim Assessment Report on the Prioritized Recommendations shared under the Lesotho TIP Report 2021 at the U.S Ambassador’s residence. Present was also the Honorable Ministers of Police and Public Safety Lepota Sekola

Honourable Letsosa indicated that through the collaborative efforts of all stakeholders, Lesotho has undertaken large strides towards addressing the challenges presented by Trafficking in Persons (TIP) Report 2021, especially under the challenging circumstances of the Covid-19 pandemic. It is through the National Strategic Framework and Action Plan to Combat Trafficking in Persons that the Government of Lesotho is more organized and effective in multi-sectoral response to TIP. The Multi-Sectoral committee is fully functional and there has been a significant improvement on the coordination between the Government stakeholder Ministries, Non-Governmental organizations as well as Civil Society.

To address the first Recommendation on TIP Report 2021, with respect to eight cases before the Director of Public Prosecutions, subpoenas have been issued to prosecute them. The Cabinet Sub Committee has also directed the Multi-Sectoral Committee to resuscitate the Task Team to Investigate and Prosecute TIP cases and allocate necessary resources. The South African Development Community (SADC) Data Collection System will also be fully utilized by all concerned parties. The Government stakeholder Ministries have an operational joint task force for inspection of the regularity of foreign workers and employers to ensure their compliance with the law and to detect potential cases of TIP.

The Ministry of Home Affairs has formed partnership with the Federation of African Lawyers (FIDA) to collect TIP data countrywide. This partnerships resonate well with the key strategic objective of the Framework which requires the government to ensure effective national coordination and cooperation among relevant stakeholders. The Cabinet Sub-Committee on TIP has directed that Regional Offices must be established as focal points for the coordination of TIP mandate at district level while the long-term strategic objective is to establish fully fledged Anti Trafficking Units, with enough resources at district level.

The following Regional Offices will soon serve as TIP focal points: Botha-Bothe will serve Mokhotlong, Leribe will serve Thaba Tseka, Mafeteng as an independent office while Mohales’ Hoek serves Quthing and Qacha’s Nek. Mining districts and factories in Botha-Bothe will be afforded specific attention as such areas are expected to increase TIP sensitive situations. The Government is also considering placing Lesotho Mounted Police Services (LMPS) attaché at the Lesotho High Commission in South Africa (SA) which will include the element of trafficking and liaise with police within SA and Lesotho. The Government has opened a specific bank account with a commercial bank to address TIP related matters specifically to support victims of trafficking and the Government’s commitment with partner organizations such as Beautiful Dreams Society and others. Certain funds have also been reallocated to the said account and the appropriate funding will be ensured in the upcoming financial year 2022/2023.

To develop an effective and professional partnership with South Africa, to increase awareness and improve coordination on TIP related issues, the Minister of Home Affairs has embarked the journey to conduct series of awareness campaign with South African counterparts effective on the 12 November 2021 in Welkom. He concluded by reaffirming the Government of Lesotho’s commitment towards rooting out TIP. “Victims’ voices lead the way”.

The U.S Ambassador to Lesotho Her Excellency Rebecca Gonzales reiterated that combating human trafficking is a top priority for the U.S Government and assured their support to the Government of Lesotho. “We want to see Lesotho’s meaningful anti-TIP progress that would warrant an upgrade to Tier 2 by the end of February 2022 because this means that we will have supported the protection of crucial foreign assistance and the country’s proposed second Millennium Challenge Corporation compact,” Gonzales. She appreciated Honourable Letsosa for his leadership in taking critical and decisive action in working to several vitally important TIP concerns.

She also thanked the Minister of Police and Public Safety Honourable Lepota Sekola for his engagement and collaboration with the U.S law enforcement agencies to increase efforts to investigate and prosecute traffickers, including officials complicit in TIP crimes. Specifically, sustained efforts to fund the police trafficking and smuggling unit and to establish a focal point in all ten districts will ensure effective responsiveness to all potential trafficking cases in Lesotho. “Our team at the U.S. Embassy is committed to supporting these initiatives in partnership with the Ministry of Police under the umbrella of our newly signed Memorandum of Cooperation”.