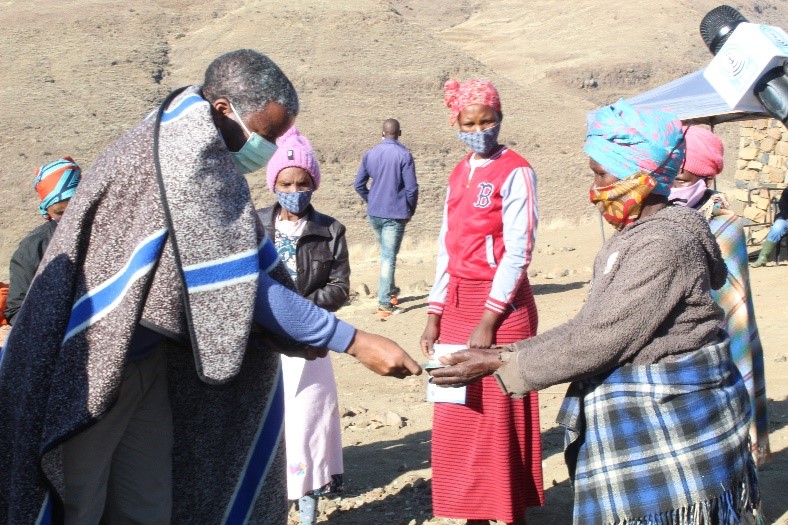 It is amid the cold weather conditions of snow-covered mountain Kingdom of Lesotho that the Honourable Minister of Home Affairs Motlalentoa Letsosa, infiltrates through Lesotho’s countryside, to ensure acquisition of birth certificates and Identity documents to all citizens in pursuit of Sustainable Development Goal (SDG) 16, Target 16.9 – “…providing legal identity for all.”

Last week the Minister travelled to the remotest and hard to reach areas of Qacha’s Nek district, if not only by horse ride.

In addition, emphasis was also made on the importance of civil and traditional marriages, which are the same, rather than to mix them, or take one as being more important than the other.

Civil Registration goes hand in hand with that of livestock, hence why the Minister encouraged livestock owners to register and mark their livestock with tattoos and branding to protect them from theft; as stipulated in accordance to Stock Theft Act, 2000. In some areas where the Minister travelled, livestock were registered and Owners were issued with certificates; while in some places, livestock marking took place.

In the same journey, Mr. Paseka Mohanoe, on behalf of Principal Secretary stressed the importance of Minister’s follow up on the Officers’ assignment across the country. He also emphasized the need for every Mosotho to be registered and secure their livestock through marking by tattoo and branding.

The District Administrator on the other hand reminded the people about adherence to covid-19 protocols, but mostly to only be out of their homes when need rises as the pandemic is severely taking people’s lives worldwide.