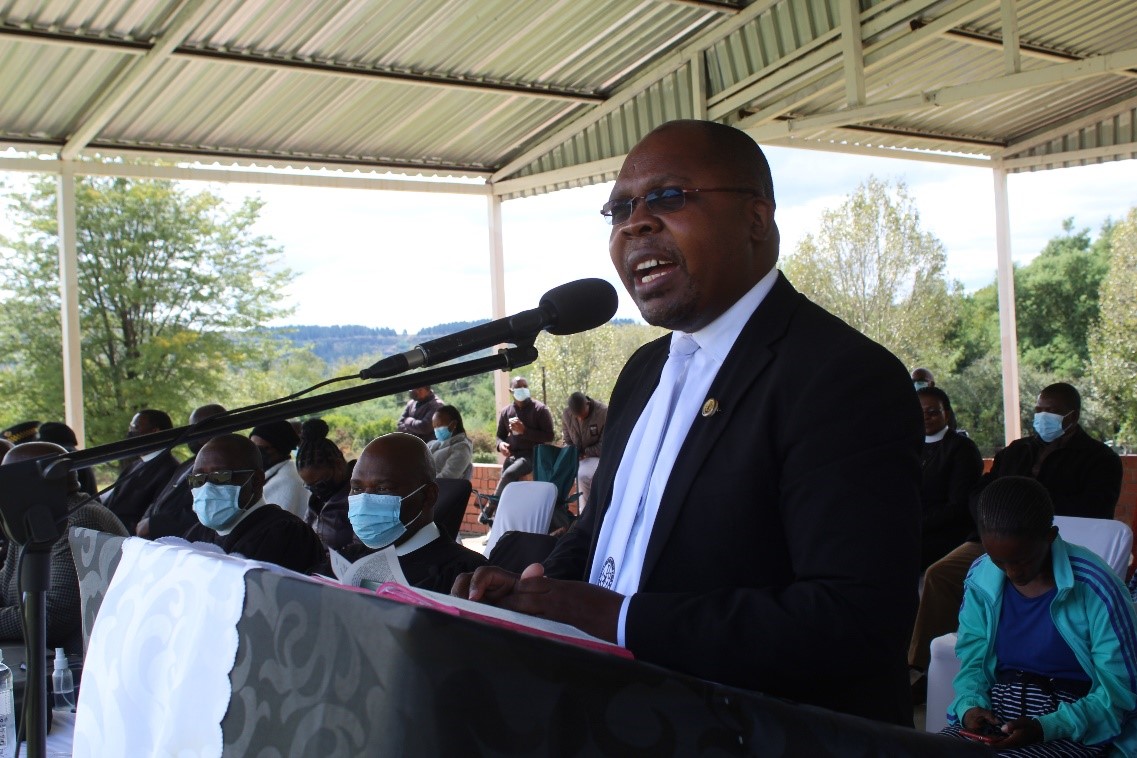 Yesterday’s Sunday service at LECSA Morija started with congregation march from Morija River Side and LECSA church to Thabeng High School playground, holding placards with messages that fight against all forms of crime. It was in the same event that the Ministry of Home Affairs represented by Principal Secretary Mr Tumelo Raboletsi and Commissioner for Refugees, Mr Mohlolo Lerotholi partook in the march.

On opening the service, Reverend Phosholi outlined the purpose of the day, as being united prayer by all Lesotho and South Africa churches against abuse at the holy village of Morija, and the rampant crime in the country. However, Morija is said to be a place where murder is in the peak of all crime. He added that nowadays the new pattern of a very serious crime has immerged; that of human trafficking. Reverend Phosholi showed that amidst the congregation is representatives from Ministry of Home Affairs, a ministry which has worked vigorously to fight against the scourge of human trafficking.

Morija residents together with their area Chief Ranthomeng Matete have tried all possibilities to fight crime but to no avail, until they have decided to request for special prayer meant to fight against crime. Matete also complained that the historic, sacred Morija has been polluted with evil acts and appealed to the congregation and the Priests to assist with prayers.

On this special Sunday sermon, Reverend Tseliso Masemene quoted “Come now, let us settle the matter,” says the LORD. “Though your sins are like scarlet, they shall be as white as snow; …” (Isaiah 1:18). According to Reverend, Basotho need to unite scrutinize their differences and make proper corrections, as by doing so, they will be forgiven. For Reverend, something is wrong with Basotho, hence the recurring problems of abuse, crime of all sorts. “It is time for us to turn away from our evil ways and ask for forgiveness”, Rev. preached.
Rev. Masemene acknowledged that Lesotho used to be a peaceful country, but today it has become “a den of lions”, we as Basotho do nothing, this calls for repentance so that we regain heavenly blessings.

Principal Secretary, Home Affairs, echoed Reverend Masemene’s plea that Basotho ought to refrain from our evil acts, so be blessed abundantly. He echoed the evil done by people who enrich themselves at the expense of poor ones, who are promised lubricant jobs, only to be turned into slaves.
In this service, Raboletsi outlined how the ministry has worked tirelessly to combat human trafficking and mentioned few success evidences of the crime. He outlined the progress made during the fight against human trafficking and mentioned few categories of those incidents: being those who were murdered, those who were rescued, those stopped from being nabbed (returned from borders), perpetrators who have been charged.