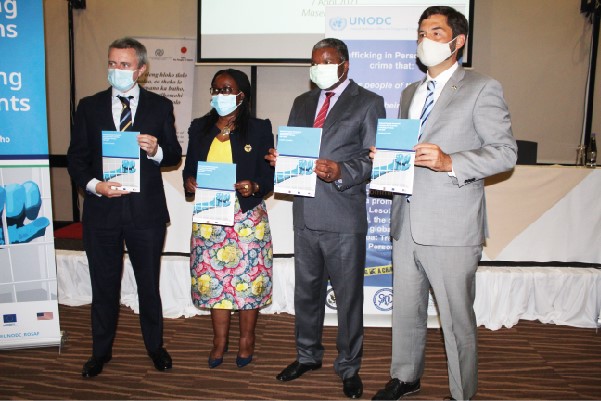 The Government of Lesotho through the Ministry of Home Affairs officially launched the National Strategic Framework and Action Plan (NSFAP) yesterday on the 7th April 2021 at Avani Lesotho.

The Honorable Minister of Home Affairs Motlalentoa Letsosa expressed his excitement and noted that the launch marks yet another milestone for the Government of Lesotho in the fight against Human Trafficking. “The Anti-Trafficking in Person’s Strategic Framework and Action Plan is not only grounded in International and Regional instruments and experiences but has also been a major theme in developing comprehensive national legislation to provide for prevention, protection and prosecution as well as care for the victims of Human Trafficking”.

He also highlighted a few objectives of the new NSFAP which include, among others; effective national coordination and cooperation among stakeholders, strengthened identification, protection and support of Victims of Trafficking as well as successful detection, investigation, and prosecution of the perpetrators of Human Trafficking.

In his closing remarks, the Honourable Minister highlighted that he will soon visit the businesses owned by foreign nationals across the country ensure legitimacy of their businesses and that they still have proper documents to stay in the country.

The acting United Nations (U.N) Resident Coordinator, H.E Ms. Betty Wabunoha expressed her gratitude for being invited to the occasion and to deliver a message of support. “The launch signifies the strong commitment of the Government of the Kingdom of Lesotho in eradicating the scourge of Trafficking in Persons”. According to her, the launch sends a clear message to organized crime syndicates that impunity and illegality will not be tolerated. H.E Wabunoha acknowledged the Government’s effort in putting together a solid action plan to deal with perpetrators of Human Trafficking.

Irregular migration to South Africa provides an enabling environment for Human Traffickers who frequently pick up and exploit undocumented travelers. Social economic factors including poverty, unemployment, and food insecurity all propel irregular migration and increase an individual exposure to trafficking.

H.E Wabunoha reaffirmed the UN’s commitment to support the Government to fully implement the National Strategic Framework and Action Plan (NSFAP) on combating Trafficking in Persons.

The United States (U.S) Embassy Representative, Mr. Clinton Brown, is hopeful that this initiative will help to protect Lesotho citizens, visitors, and residents from Human Trafficking.  The U.S has recognized Human Trafficking as a global threat. Brown indicated that “No country is free from this scourge”. He further noted that Since 2012 the U.S Department of State in Lesotho has delivered technical assistance to help develop Anti-Trafficking policy and efforts as part of that recognition and the America’s long-standing partnership with the people of Lesotho. He indicated that the NSFAP promises to make major contribution in combating Human Trafficking. “We need to think strategically about the bigger picture and follow it through. I urge all of us to fulfil the promise of this document”.

The European Union (E.U) Representative, David Healy said protecting the society from Human Trafficking is a big priority for the E.U. “ The Trafficking in Persons is a highly profitable crime that brings enormous profits to criminals while incurring a tremendous cost to societies”.

The United Nations Office on Drugs and Crime (UNODC) Program Officer, Signe Rotberga, noted that the National Strategic Framework and Action Plan seeks to ensure that all Government departments and other stakeholders works collectively to ensure implementation of the plan.