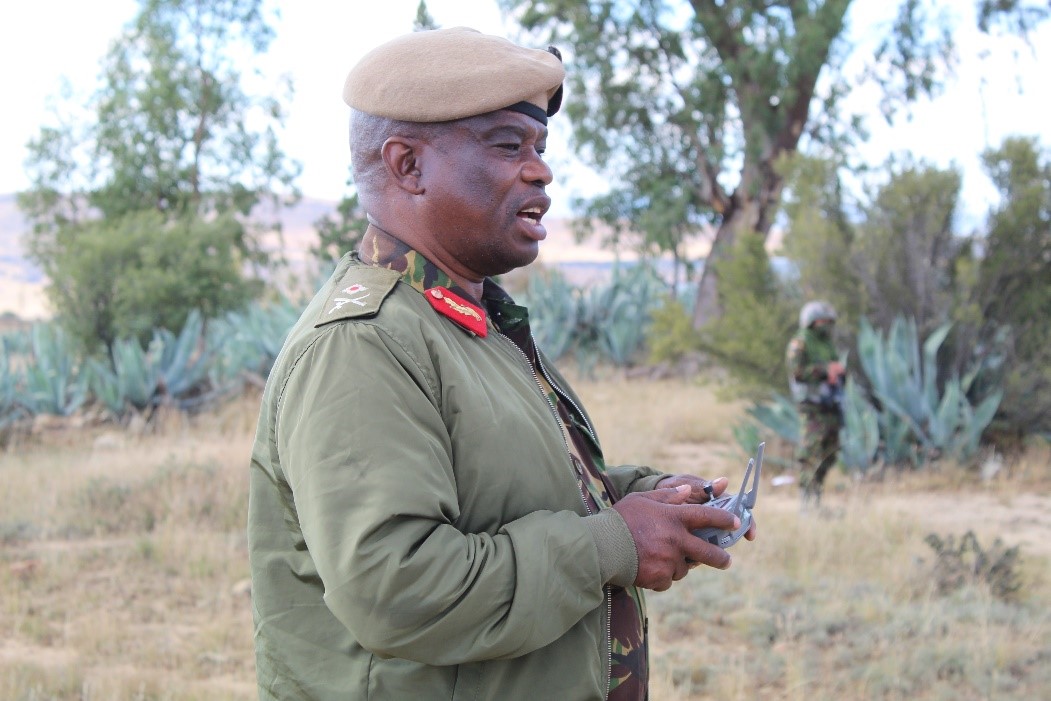 The covid-19 pandemic as a global threat has immensely affected movement across countries and has compelled countries to revise their immigration laws and or policies.
Movement between countries has been restricted due to the overwhelming spread of the disease.

Lesotho being also affected restricted its movement to the only neighbouring country of South Africa, in that many of its borders were withheld during this period of the pandemic and only few were left opened. This decision seems to have impacted negatively to both Lesotho and South Africa, as illegal crossings seem to emerge, and people cross over despite covid-19 restrictions.

It is on this basis that the Ministry of Home Affairs had a public gathering at Liphiring village (Mohales’ Hoek) on Wednesday 28 April 2021. It was at that place where somebody has erected an illegal gate used as a crime spot, where vehicles as well as stock theft take place. In this gathering were Lesotho, represented by Principal Secretary, Ministry of Home Affairs (Mr. Tumelo Raboletsi); South Africa represented by Member of the Executive Council (MEC) for Free State Province, Hon. Sam Mashinini.

The objective of the meeting was to devise ways to destroy the illegal gate and erect a legal one, which would allow community crossing for nearby villagers for their daily activities. It was suggested that movement between Lesotho and South Africa, be legalized with proper documentation, which would facilitate ease of movement. Home Affairs, Lesotho, concurred to the suggestion as that has been one of the discussed issues of ‘Statement of Intent from Bilateral negotiations between the Ministers of Home Affairs Lesotho and South Africa – towards achieving a special relationship’ in September 2015. The Principal Secretary as the representative of Ministry responsible for borders promised to make a follow up on the implementation of the suggestion with his superiors.
As a follow up to last week’s meeting, Lesotho’s Deputy Minister Home Affairs with that of Local Government and local security agencies revisited the place. Apart from illegal crossing, land revilement by South African farmers was also taken note of. One of the security personnel suggested the inclusion of Foreign Affairs Ministry where issues relating to two countries are discussed; “It is important to include them as I have realised that they are not aware of issues of this nature”.

The Officer further stressed on unreported criminal activities in that area which was also echoed by the Area Chief. Local Government as Ministry concerned with land use, found it deem that Commissioner of Lands be co-opted to assist in matters pertaining to land use. Home Affairs concurred that bilateral meeting be held with South Africa to discuss these issues especially boundary demarcation as prescribed by African Union and it has done with Botswana and Namibia.

Following the 28th April 2021 public gathering at the boundary between Lesotho and South Africa at Ha Pitsi village in Mohale’s Hoek, on the 4th May 2021, Ministry of Home Affairs together with Local Government and Lesotho Security Agencies made an inspection of the border line with the concern that part of the Lesotho land is being consumed illegally by South African farmers.
The LDF Deputy Commander, Major General Matela Matobakele suggested that the Ministry of Home Affairs should include the Ministry of Foreign Affairs in the next meeting where LDF will be sharing their experience and observations on the boundary issues. “It is important to include them as I have realised that they do not know much about these things”. Major General Matobakele attested that Mohale’s Hoek residents indeed practice livestock theft in from South Africa in many ways and they sometimes get away with it because the people residing near the boundary fail to report the matter.

The Deputy Minister of Home Affairs – Honourable Maimane Maphathe, requested that Lesotho and South Africa authorities ought to sit down and identify the risks posed by the gate at the boundary and come up with an amicable solution. The chief of the village Mofumahali Mpolokeng Moletsane also confirmed that, as the nearby residents to the boundary they become the first to be questioned every time after there has been a livestock theft and therefore, they remain vulnerable to the consequences.

The Deputy Minister of Local Government – Honourable Selemo Mangobe expressed his concern about the unclear boundary at the area and said the Commissioner of Land should join the next meeting and present the map in order to ease the concern on the land of Lesotho being consumed by South Africans. Tumelo Raboletsi insisted that the resolution of African Union for the neighbouring countries to verify their existing boundaries should be put into place between Lesotho and South Africa as it was done with other neighbouring countries such as Botswana and Namibia.