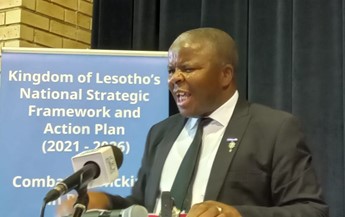 After a few months of sensitizing the public about the horrific human trafficking crime; the Lesotho Evangelical Church in Southern Africa (LECSA), Gauteng Presbytery invited Honourable Minister of Home Affairs, Motlalentoa Letsosa on Sunday 6th March 2021.The invitation was meant to sensitize the congregation about the dangers of human trafficking in Orlando Soweto.

The Minister pleaded with them to be vigilant about empty promises for job seekers, while in fact they are meant to be slaves or be misused. The result is either being murdered or dismember victims.

Emphasizing how rampant this scourge is, the Minister confirmed that two victims have been rescued from South Africa to Lesotho early this year. He also cited that one perpetrator was arrested around this time last year for such crime and he is sentenced to 20 years imprisonment as per Human Trafficking Act 2011, as amended in 2020.

The LECSA Executive Secretary Rev. Nelson Khethang Phosholi said after the Minister’s untiring effort to combat human trafficking, the church found it deem to have him talk to the congregants as most of them are from Lesotho. “Even those who are permanently based there originate from Lesotho and they therefore still have the connection with those at home”.

The church is also at awe about human trafficking as even in South Africa, Rev. Phosholi attested that they have attended funerals for people who died as a result of human trafficking. According to one of the youth congregants Teboho Moiloa, this awareness has been an eye opener to most of them. They will now be able to recognize situations that could put their lives in danger. He acknowledged the fact that people are trafficked by those who are closest to them being either neighbours, friends or relatives. “The Minister made an example of Joseph in the Holly Bible who was sold by his own brothers”, Moiloa said.